Research and graduate teaching concentration on the use of near-surface geophysical survey and remote sensing techniques to aid in archaeological fieldwork.

A full complement of geophysical instrumentation and computer processing support forms the nucleus of the Archaeological Geophysics Laboratory housed in the William S. Webb Museum of Anthropology. Faculty, students, and research staff in the department are the primary users of this equipment; however, researchers in other UK departments and other Kentucky educational institutions may have access to this equipment for research purposes. 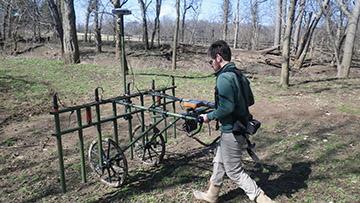 Archaeological geophysical survey refers to multiple techniques that measure variation in near-surface physical properties of the ground, such as mineral magnetics, electromagnetic induction, electrical resistance, and ground density. Buried features, like stone or brick foundations; variation in sedimentary structure and ground moisture, such as in archaeological deposits, trenches, mounds, and burial vaults; and other subsurface features have characteristic signatures that geophysical instruments can detect. Based on the measured variation in geophysical properties over a site, buried features and deposits can be accurately located and mapped without extensive excavation or other ground disturbing methods. Researchers can use the information acquired during a geophysical survey to design cost-effective excavation strategies, reveal large-scale community patterning, and identify culturally sensitive human burial sites.

Current and Past Projects