My research interests have dual foci: (1) My current, on-going research centers on the contextually changing meanings of tangible and intangible cultural property, as well as cultural identity politics and anthropological ethics. With my collaborators, I am exposing the global traffic in a category of non-Western art/artifacts (described below) as a case study; and (2) for over twenty years, my long-standing research has examined expressions of gender and gender theory approached from both anthropology of meaning and from development anthropology perspectives.

My current advocacy anthropology research project, in which I am collaborating with anthropologist Dr. Linda Giles and Kenyan museum curator, Mr. John Mitsanze, tracks the trajectories and changing meanings of vigango (pl., kigango, sing.). Erected by the Mijikenda peoples of the Kenyan coastal hinterland, vigango are wooden memorial statues believed to incarnate the spirit of deceased males who were members during their lives of the secret society, Gohu. The on-going theft of these statues to supply the world art market has disrupted Mijikenda families, their religious beliefs, and intergenerational relations. In the United States, many of the almost 400 vigango we have so far located were purchased by members of the Hollywood entertainment industry and subsequently donated to museums, in some cases in order to create charitable tax deductions for the donors. Literally hundreds of vigango are now stored in United States museums, where they bolster African art collection, and have even been used as film props. These changing uses and meanings of Mijikenda memorial statues as they are propelled around the world illustrate the theoretical, political economic, and ethical issues surrounding the global traffic in cultural property, which Interpol in 2006 estimated to be a $4.5 billion annual industry.

Simultaneously, I continue to write and publish my research on aspects of gender relations among the Mijikenda peoples of the East African coast and hinterland. To date, my theoretical work has focused on the intersection of gender with such topics as aging and the lifecourse, indigenous notions of gendered property rights, kinship, ritual, ethnomedicine and medicocosmology, secret societies, ethnicity and the body. I also retain my strong interest in gender issues in developments, where my research among the Mijikenda has focused on women's organizing and development as ideology, the impact of women's groups on individual women's variable economic successes, and Mijikenda women's groups practical and strategic gender interests.

(Note: Web links below are not maintained by the University of Kentucky. The University takes no responsibility for the content of these sites.)

The Case of the Stolen Statues: Solving a Kenyan Mystery, The New York Times, April 16, 2006. 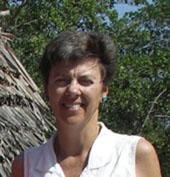